Variation of Instrument of Government

Michelle Daniels - Clerk to the Governors

School governors are one of the country's largest voluntary groups with around 300,000 contributing to strategic development and raising standards of achievement at more than 30,000 schools.

School governors are members of their school's governing body, which is known as a 'corporate body'. A corporate body has a legal identity that is separate from its members and as a result, individual governors are generally protected from personal liability as a result of the governing body's decisions and actions provided they act honestly, reasonably and in good faith.

Individual governors have no power or right to act on behalf of the governing body except where the whole governing body has delegated a specific function to that individual or where regulations specify a function is to be exercised in a particular way.

School governors are drawn from different parts of the community and can be parents and staff or from the LA, the community and other groups. This helps ensure the governing body has sufficient diversity of views and experience but does not mean governors of a particular category represent that group on the governing body. For example, parent governors do not represent the parents at the school and do not report back to them.

The governing body has a range of duties and powers and a general responsibility for the conduct of the school with a view to promoting high standards of educational achievement. Its responsibilities include but are not limited to:

There are a range of roles and actions the governing body or individual governors need to consider:

The role of the governing body chair (and vice chair in the chair's absence) can include the following:

Chairs cannot take decisions on behalf of governors unless there has been a resolution of the whole governing body to delegate a specific authority. However, they are able to take action if the matter is urgent.

The School Government (Procedures) (England) Regulations 2003 Regulation 6 defines 'urgent' as a case where the circumstances are that a delay in exercising the function would be likely to be seriously detrimental to the interests of the school; any pupil at the school, or his parent; or a person who works at the school and where it would not be reasonably practicable to hold a governors' meeting to resolve the issue.

Any urgent action the chair or vice chair takes on behalf of the governing body should be reported at the next meeting.

The chair of governors is responsible for making sure that:

The chair works closely with the headteacher, listening to concerns, offering advice and talking through disagreements before governing body meetings.

They carry out duties delegated by the governing body, attend school functions or make sure another governor represents them, and are accessible to other governors, staff and parents. Chairs of governors also work with the local authority and meet governors from other schools. 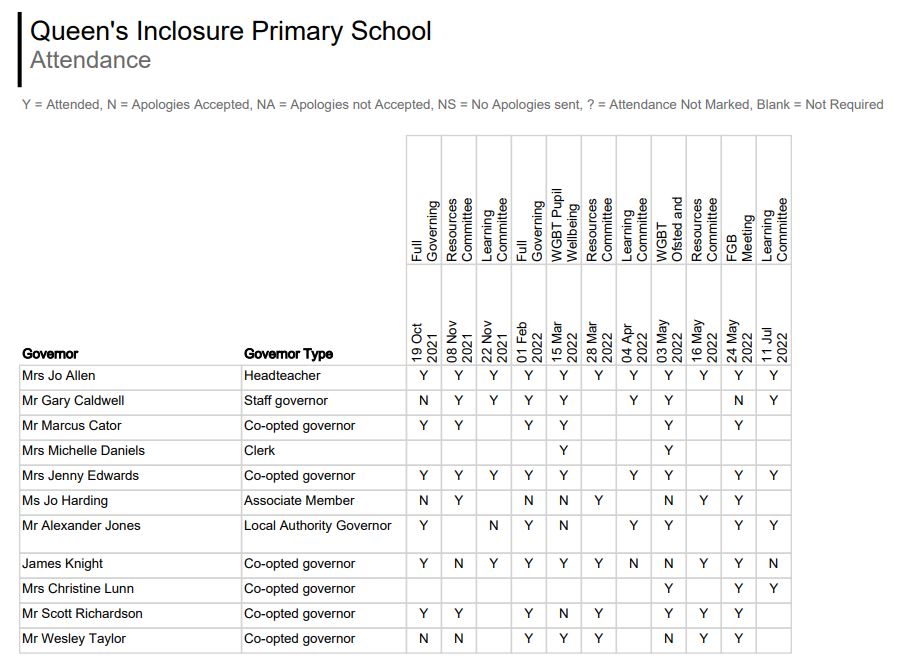 The Governing Body are always keen to receive feedback about the school and can be contacted directly by emailing governors@queensinclosure.hants.sch.uk. They will not, however, look into complaints that have not been addressed to the Headteacher in the first instance. Any such issues received by governors will be passed to Mrs Allen.